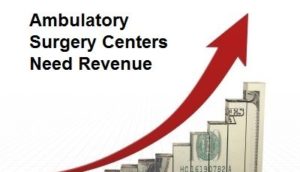 he Referral Revenue Way to ASCs’ Continuing Growth
Ambulatory Surgery Centers (ASCs) offer patients the convenience of having surgery and other procedures performed safely outside the hospital setting. There are approximately 5,600 Medicare-certified surgery centers in the United States. Of these, approximately 1,400 to 1,700 have a hospital partner. Over the past 40 years ASCs have grown in both their numbers and the volume of patients they handle. The key reason for this: they offer affordable, cost-effective services and lesser wait times compared to acute care facilities nearby.

ASCs have a good feel for the pulse of the community’s population health issues and are able to address the gap effectively, thereby increasing their Patient Satisfaction scores. A testament to their success is the fact that increasingly ASCs are being owned by hospitals. In fact, today 23% of ASCs are owned by hospitals (according to the ASC Association). When a hospital buys a center, they usually convert it into a hospital outpatient department (HOPD) as the HOPD rates are almost double that of ASC reimbursement rates.

ASCs help reduce the cost of services
Furthermore, ASCs are helping reduce the cost of surgical services. For example, Medicare pays hospitals US$1,670 for performing an outpatient cataract surgical procedure while paying ASCs only US$964 for performing the same surgery (ASC Association). Similar examples are available for Colonoscopy and Cataract surgeries, Spine surgery, Pain Management, Neurology and so on.

There are currently more than 6,000 ASCs in the country. But there has been a dramatic slowdown in the net addition of ASCs in the last two years. Why? Current market conditions are not conducive to their proliferation.

Over the last several years, certain key surgery centers’ areas of reimbursement have declined. At one point, surgery centers made a disproportionate percentage of their profits from workers’ compensation cases and out-of-network cases. Many states have since implemented fee schedules for workers’ compensation. Moreover, payers have become increasingly reluctant to provide out-of-network reimbursement at higher billed rates.

Despite the substantial rise in the number of spinal surgeries being performed over the last 20 years, Medicare and some insurance companies still won’t pay for them today unless they are done in a hospital. In addition, there are several critical legal issues facing surgery centers. All these issues above lead to significant revenue pressure on ASCs.

Technology can ease revenue pressure
So what should ASCs do? Fortunately, there is technology available today that can help them drive their top line growth, rein in their lost opportunities, and produce healthier bottom lines.

For one, there is a system that ASCs can rely on for full visibility into and management of the referral process. As it is a Cloud-based referral platform that operates on the periphery of IT systems, it can be activated and used within a matter of days. Called the Loop, it gives ASCs the insights they need in the most easily accessible form–detailed analytics on dashboards–so they can quickly and confidently pick out the lines of business that are most popular in the communities they operate in, and expand their facilities or extend their services based on that market intelligence. When this system is coupled with a robust marketing function, referral rainmaking will then just be a matter of days for the deploying ASCs.

Our study indicates that a 20% reduction in referral leakage can add up to 80% additional revenue for the ASC. The math is too compelling to ignore. ASCs should act now and quickly. Plug that leak!

The author is the CEO of Napier Healthcare, a leading provider of Cloud-based referral management Loop technology that is revolutionizing the way hospitals seek, secure and retain referrals.

The images used in this post have been sourced from multiple websites. He acknowledges and expresses thankfulness to the original sources.